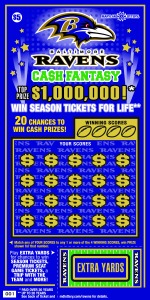 On February 8th, a lucky Maryland Lottery player will get the Ravens prize of a lifetime. That’s when the winner of the Ravens Cash Fantasy Season Tickets for Life will be selected.  Nearly 30,000 entries have been submitted, but only one will walk away with the sought-after prize.

Along with the announcement of the drawing date comes a new prize category.  Players can now enter to win a set of six suite tickets plus parking to a 2010 game.  Other prizes that still remain include:

The Season Tickets for Life winner will be announced on WBAL-TV, Channel 11 during the February 8th evening Pick 3/Pick4/Bonus Match 5 drawing at approximately 7:57 PM.  All other prize winners will be notified by the Lottery.

To enter to the Ravens Cash Fantasy promotion, players can scratch the perforated section at the bottom of their scratch-offs and enter the extra yards for the prize category of their choice at mdlottery.com/ravens.  Entries must be received by noon on Monday, February 8th. There is also a $1 million instant prize remaining on the ticket with 88% of the game sold.  Go to mdlottery.com/ravens for more information including drawing dates.