Posted on February 18, 2009 | Comments Off on It’s Double the Luck for Baltimore County Woman 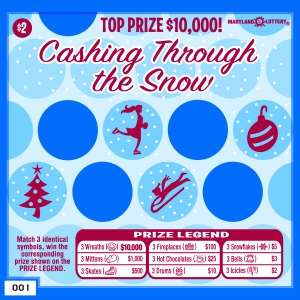 After four weeks and two hospital stays, a Baltimore County woman finally made it to Lottery Headquarters this morning to claim her Cashing Through the Snow prizes. The 43-year-old purchased her tickets and realized she was a big $10,000 winner over a month ago. She also won an additional $500 on another Cashing Through the Snow ticket bought at the same time. Unfortunately her good luck was followed by some misfortune when she fell ill shortly afterward. While she spent time in the ICU her parents held on to her tickets for safekeeping.

Recounting her experience, the computer analyst said, “I scratched my tickets in the store and I just cried when the clerk verified that I’d won.” When she returned to her car, her 25-year-old-daughter was waiting for her. “I asked her, ‘How much do you love me?’” “You know I love you,” her daughter replied. The winner told her daughter she would give her some money for a car and then called her parents with the good news. In addition to helping to fund her daughter’s automobile, she plans to give other family members some money and the rest will go toward purchasing a house.

The winning ticket was purchased at the Dollar Buys on Security Boulevard in Baltimore.

This entry was posted in Scratch-off, Winners and tagged baltimore, cashing through the snow. Bookmark the permalink.